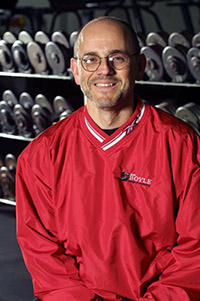 Speaker, writer, coach and consultant, Michael Boyle, one of the most popular contributors to the field of performance enhancement training. He has been involved in training and rehabilitation of a wide range of athletes in every major collegiate and professional sport, including the US Women's Olympic teams in soccer and ice hockey. Mike's work has been featured in the media on HBO RealSport, ESPN, CNNSI, as well as in Sports Illustrated and USA today. Mike Boyle Strength & Conditioning has been voted as the #1 gym in America by Men’s Health.

Pleasure to have you with us Mike!I have been following your work for as long as I have been in this field. You have been coaching for probably as much as I have lived. What do you think makes one person a winner in life and/or in the gym and the other not so much of a winner? What's the strongest driving force in successful people in your opinion?

It sounds corny but it really is attitude. You get to choose how you want to think and behave every day. I like to say that success is easy and hard at the same time. The formula is easy. Get up early, stay late, read, listen.

What's your 'first' advice to someone who wants to lose weight?

Drop grains out of the diet. You can get all the carbs you need with no grain.

You have explained mobility work, stretching and warming up thoroughly in your book "Advances in Functional Training" which is a revelation to coaches around the world. For our audience who haven't read your book yet and weight train, would explain why we often don't do static stretching prior to intense workouts?

Static stretching has been shown to decrease power and I think that has scared lots of people away. The reality is that everyone should static stretch but, then warm-up after they stretch.

You have stated in your book "Cold muscles may actually undergo some plastic deformation and increase in length". Does this mean static stretches aren't much of use after exercise either since muscles are pretty warmed up after exercise and if stretched will return back to their original position?

I would say yes. I have clients who like to stretch post workout. I don’t stop them if it makes them feel better but I don’t require it.

In your opinion, how sport specific one should be in the weight room? Or should one just focus on getting as strong and fast as they can get in the gym with the basics of weight training and play their sports to make the strength and conditioning gains carry over to the sport?

It depends on your definition of sports specific. I think we need lots of unilateral training to properly address the muscles but I also think that trying to mimic specifc skills in the weightroom under load is a waste of time. So should we just do squats and deadlifts and then hope we get better? No. On the opposite side trying to mimic something like the tennis swing in the weight room is just as foolish.

What are the top two mistake 'trainers' make when designing programs?

If you say trainers? Probably getting too fancy. We need a push, a pull, a leg and a core exercise. It’s pretty simple. Trainers often don’t have a real philosophy. Instead they move from fad workout to fad workout based on what they read in a magazine.

What are the top two mistakes ‘trainees’ make when beginning an exercise regimen?

Trainees spend too much time on what they see in a mirror ( pecs and arms) and do way too much low intensity cardiovascular work.

"Core" has become the most confusing word in the fitness industry. The moment you speak of the core people start to think 'abs'. It's more so when someone has back pain. They won't stop training their rectus abdominis cause their physical therapist told them "your core is weak, draw-in when lifting, get your core strong". Like the anti-extension/anti-rotation and stability hype to core training these days in the West, it's still crunching over-reaction to core training here in the east. Can you clarify the word "Core Training" for our audience?

Not in a short interview like this. In short, core tarining should be more about the prevention of movement than movement itself. The muscles of the core should prevent extension, lateral flexion and rotation. Rotation should come from the hips, not the low back. In short, don’t crunch and don’t rotate. Flexion and rotation are the enemies of the spine.

Energy leaks are really about efficiency. I think what makes one athlete better than the other is the quality of the training program. A well designed programs prevents/ stops energy leaks.

As babies we are great squatters. We have exceptional hip mobility. As we age we flex the hips less and less and eventually begin to lose that range of motion we had as children.

People say, "Oh, I can't squat, my knees hurt", and that makes the knee problem even worse. Yet, they lunge. What’s going on? There is pain site, and there is pain source. Should they, or should they NOT squat?

Everyone should be able to squat. With that said, I prefer single leg variations . We live on one leg. Most people who say they can’t squat due to pain actually have no idea how to squat. Once they learn they realize they have no pain. There is a big differnce between collapsing and squatting. Most people collapse into a ball instead of squat.

When teaching the squat, I hear most of my European clients say, "Oh, I thought you shouldn't have your knees pass your toes when squatting". Where did that come from?

I think it came from well intentioned coaches and therapists. The reality is that the knees should move forward over the feet. It’s really a question of sequencing. If the first thing someone does in an attempt to squat is move from the ankles, that is a mistake. However, it is actually impossible to squat without the shin moving forward to some degree.

"The deadlift is a better total-body exercise with more carryover to sprinting and can be done faster, in a concentric-only manner and with less equipment (compared to the squat)", as you have mentioned in your book, the “Advances in Functional Training”. The deadlift and its variations are the most under-used exercises in the entire country here. Can you please explain their importance in the athletic field and generally in life?

You just did! The deadlift is the best total body exercise you can do. It beats squats because it has all the lower body benfits but, the upper body gets additional benefit from the bar being in the hands.

What would be your approach to the deadlift and squat for someone who suffers back pain? Of course no two back pains are equal but should one entirely dismiss these exercises pre and post rehab if they have back pain?

I avoid bilateral exercise with back pain clients. I would do strictly unilateral training in 90% of the cases.

Which exercise-related books are your top two favorites?

For trainers, everyone should read McGill’s Low Back Disorders and Thomas Myers Anatomy Trains.

And which top two books, not exercise-related, have influenced you the most?

How to Win Friends and Influence people by Dale Carnagie and Steven Covey’s 7 Habits of Highly Effective People are the top two.

Some of my books at Omnifarious.net.pk Note we got all the favorite books on exercise here.
I have also read Mike’s non-exercise related favorite books ;)

What's new at MBSC? Would you like to tell us who are the upcoming stars?

I think my staff is filled with upcoming stars. If I mention one, I’d have to mention them all. As for MBSC, we have lots going on. MBSC-Thrive is bringing our methods to clubs all around the US and our Body By Boyle online site provides education for trainers all over the world.

Women normally 'avoid' resistance training in this part of the world in fear of getting 'bulky'. Would you please explain why they don't have to be afraid of lifting heavy?

Most women just don’t have the genetics to build a lot of muscle. In fact, most men don't either. Muscle is hard to build and in general looks good on both men and women.

Where can people find more about you and your work Mike?

Yes, think of your clients as the mirror you see yourself and your skills in. It will change the way you train people.

Thank you Michael Boyle! It was a pleasure to have you with us. I alone, would be spending a lot of years to come learning from your experiences.